Bolivia’s Salar de Uyuni is the largest salt flat (or playa) in the world. For much of the year, it stretches out in a seemingly endless expanse of white, with a salt crust covering 10,000 square kilometers (4,000 square miles). During the rainy season, water can fill part of the salt flat and give it a stunning, mirror-like appearance. In early 2022, that watery mirror grew larger and lingered longer than it has in several years.

Abundant rainfall around the Altiplano in November, December, and early January had the Salar de Uyuni brimming with water nearly to its edges. In fact, local newspapers reported flooding in some areas and temporary prohibitions on travel across the salar during the busy tourist season.

“The extent of the filling of Salar de Uyuni this year is above normal. The rainy season started earlier than previous years, and rainfall was well above average over the southern Altiplano,” said hydrologist Jorge Molina Carpio of the Universidad Mayor de San Andrés. “This was probably related to the onset of a significant La Niña event. Strong La Niñas during the rainy season are related to positive rainfall anomalies in the southern Altiplano.”

The false-color images above were acquired by NASA’s Aqua satellite on August 22, 2021, and NASA’s Terra satellite on February 19, 2022. Each satellite used its Moderate Resolution Imaging Spectroradiometer (MODIS). The images were composed from a combination of visible light, near-infrared, and shortwave infrared (MODIS bands 7-2-1) to better distinguish standing water (blue and dark blue) from clouds (white) and the salt flats (shades of teal). 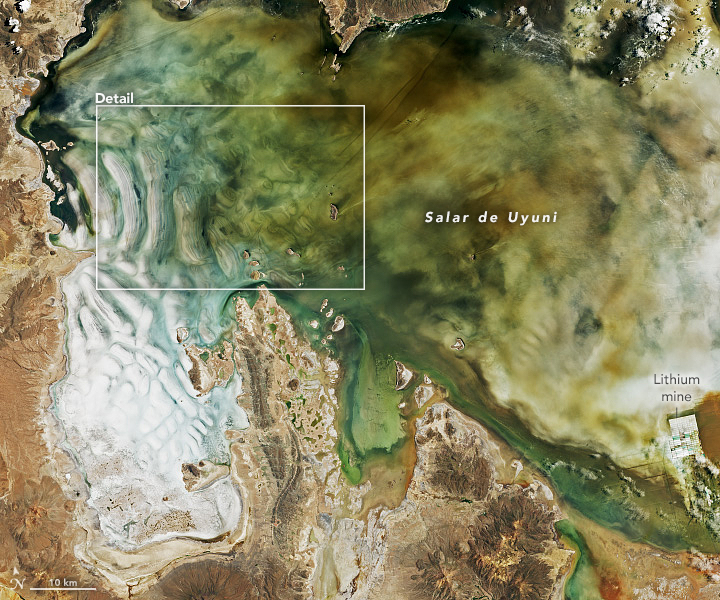 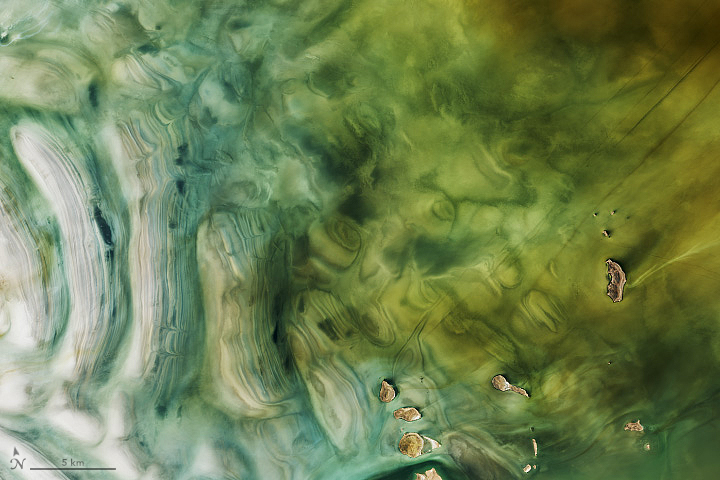 The natural-color images above were acquired on January 31, 2022, by the Operational Land Imager (OLI) on Landsat 8. Note the discoloration of the water and the salt flat, which could be due to a combination of runoff, volcanic sediments, and microbes or algae thriving in the water.

“Along the Altiplano, but especially in its southwestern edge, precipitation is largely concentrated in austral summer, when transient periods of intense convection are fueled by moisture from the Bolivian lowlands and Amazon basin. The rest of the year is bone dry,” said René Garreaud, a climate scientist at the University of Chile. High-level winds, which vary from season to season and with La Niña and El Niño events, control when and how much moist air rides up onto the plateau. “The stronger and more persistent the easterly wind, the more precipitation you get over the Altiplano.”

Garreaud noted that there was a strong easterly flow over the central Andes in December 2021 and early January 2022, leading to abundant rain in the Uyuni-Potosi region. “This area is a closed basin, so all of the precipitation—as rain at the valley floor and snow over the surrounding peaks—contributes to the filling of the Uyuni and Coipasa dry lakes,” he added.

Salar de Uyuni is rich in minerals—especially lithium (used in batteries), halite (common table salt), and ulexite and gypsum (for fertilizer and plaster)—some of which have been harvested here since at least the 1600s. The stunningly flat landscape draws many tourists who come to see the salty crust in the dry season and the mirror lakes in the wet season. The salt flat is also popular with remote sensing scientists, who use the landscape to calibrate satellite imagers and altimeters.